Game and art by: doll divine & azalea's dolls this game is a sub-portion of the much larger, lord of the rings & hobbit scene maker. featuring prominently in the book and movie, the hobbit, dwarves are a tough folk who make their existence mining deep into mountains. this dress up game/scene maker lets you create male dwarves as well as the elusive females! according to tolkien, females are only 1/3 as abundant. they have facial hair and dress like men when venturing out of the mountain, leading to speculation that they don't exist at all. the styles seen in this game are inspired largely by the interpretation of the race in peter jackson's movies. since the females appear only very briefly in the hobbit (and not at all in lord of the rings), we tried to follow along with the movies' concept art. the designers decided to scale back full-on beards for the ladies and we followed their lead.

- The dwarf scene maker was created as a ..

- Featuring prominently in the book and movie, ..

- Hello ladies! we have a new and exciting game for you, ..

- Game by: nickelodeonit's great to see a franchise create ..

- With only a few days ‘till the start of the greatest ..

- Coachella scene maker is a dress up games game 2 play ..

- Come and join us in getting the ‘coachella scene maker’ ..

- With only a few days ‘till the start of the greatest ..

- There are only a few days left until coachella, the .. 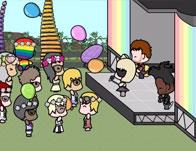 - With only a few days ?till the start of the greatest music ..