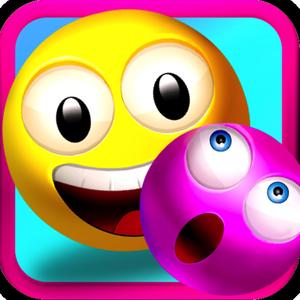 Emoji city crush is a match three game that is easy to learn but difficult to master. it is a non-stop blitz of cute emoji's! the deranged evil emoji felt like the least popular emoji in the city. he wanted more attention, so he helped all the other emoji's escape from emoji city. now the emoji hunter is chasing down the emoji's who are scattered all across the big cities like london, paris, dubai, new york and rome! the game is simple. help the emoji hunter line up three or more identical emojis vertically or horizontally. earn tons of tokens along the way and use them to buy fun power-ups. game features: ** cool design** check out the awesome graphics and groove to original songs and sound effects as you bust a move, dx style. **try 3 modes of gameplay** levels test your skills and become the best. timed match as many emoji's as you can as the clock winds down. endless swipe, dash, and crush to your heart's content and earn tons of tokens. **earn cool powerups** chameleon create any animal to help with your matching mania. magic net eliminate all of one type of emoji tile in one big blast! evil emoji trap catch the evil emoji and get him off the screen. clues find elusive matches and solve the puzzle. **choose a background** pick from london, paris, new york, dubai and rome **make the emoji's laugh** match four emoji's to make one laugh. match two more tiles with the laughing one, and watch all the adjacent tiles pop! **prove your emoji catching prowess** play to beat your high score, earn tokens, and redeem them for helpful powerups on your way to match 3 mastery.