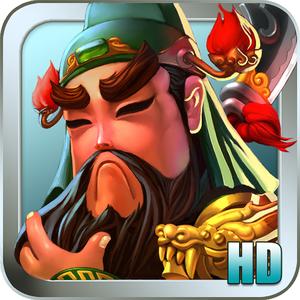 ★★★featured as "new & noteworthy" and "what's hot" in 80+ appstores!★★★ official qq group: 127874240. your advice to our product will be very much appreciated. follow us on twitter: @gamer2z tired of td games of guns and rockets? three kingdoms td is definitely worth your trying. it is a unique td game on ipad, which story is based on the famous three kingdoms era in ancient china history. you will play as the army of liu bei, leading the five generals of tiger to fight through over 20 classic battles. you need to deploy your units and heroes effectively to defend your headquarters. meanwhile, you have several ways to gain the advantage in battles. - upgrade the heroes by sending them to fight and make them more experienced; - equip your heroes with items acquired during battles; - use heroes’ skills for better fighting power. you are going to face various types of enemies in those huge battlefields. try to win by your splendid tactics and strategies. features: - the story is based on the fantastic history of ancient china’s three kingdoms era. the cartoon style artwork is full of chinese elements. - there are 5 types of units with distinguishing features. each of them has 3 different levels. higher levels will be unlocked as you advancing in the campaigns. - 16 heroes with various fighting types will join you during the journey of uniting the entire country. - heroes will get experienced during battles and learn more amazing skills when leveling up. top level skills have stunning visual appearance and mighty effect. - tons of unique items like weapons, armors and accessories make the heroes even powerful. - enemies of higher levels may fly or being invisible to normal defense units. bosses like elite enemy generals will be tough challenges to you. - 25 well designed battlefields of various territory types in 4 different difficulties and 2 game modes worth hundreds of hours’ game play. - try to challenge in each battle to get higher scores and better rating.