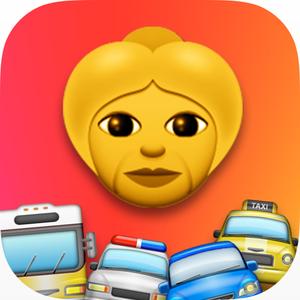 Gran text auto is a texting and driving game, starring gran! half driving — half texting — half octogenarian adventure! like many teens in sunny los emoji, california, gran loves surfing, parties, chill vibes, and most of all texting! but gran is 88 going on 20 doing 60 in a 30! it's dangerous, but gran don't care! gran loves danger! it's like breakfast to her. she eats danger like other emoji people eat emoji egg-in-a-frying-pan! whether cruising the city or by da' beach, gran never puts down her emojiphone! not even to save her life! gran has lived a life! not a day wasted. unlock achievements in game center to read more about her. *** much car crash *** emoji automotive makes 10 types of cars. each 2015 model vehicle brings unique tragedy to gran's inevitable accidents! drive 'em all! crash 5 of the same type to take it for a spin! *** crash snap *** gran's favorite emojiphone app: crash snap! share pics of disaster and mayhem on social media like facebook, twitter, instagram, or probably whatever else the kids use these days… *** so upgrade *** you can remove the ad… but you don't have to. gran doesn't pay for, like, any apps. she says she doesn't even notice the ads anymore, so why bother. it's cool if you do though! it also unlocks golden gran mode, but so does sending of texts! will you earn it? iron price or gold price? talk to all gran's family and friends… even the imaginary friends… and some thirsty creeps… and some animals… even memes! do try this at home… this game… not texting and driving. seriously, don't end up like gran… it always ends badly. "it's free. download or fomo" — gran jibber jabber: no emoji were harmed in the making of this game. all emoji are fictitious. any similarities to any persons is purely coincidental, but kind of funny; you should post a pic of them. anything else this reminds you of is probably intended parody and seriously hopefully everyone is cool with the jokes. seriously, this is obviously punny parody. let's all be cool about it.

- Angry gran completes the final leg of her global tour as ..

- Things are getting spooky in the angry gran run world! ..

- Take to the skies in this thrilling new angry gran ..