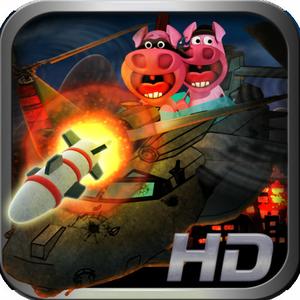 Looking for a fun, addictive game involving a zany police chase? if you're like all the other game enthusiasts who loved the thrills of smash piggies, the wild and zany iphone game where you play piggy bank robbers on the run after a big bank job, you’ll love the new version of the crazy game by free action games plus fun apps. these bad piggies are on the loose again in smash piggies 2, one of the best new kids games out since the new year. but this time the stakes are up as our bank-robbing heroes take their crime spree to the skies in a stolen military aircraft! get the premium rush as you fly through the city, criminals on the run...but this heist isn't over yet. with bank vaults literally falling from the sky on parachutes, this could be the chance for our swinish friends to really strike it rich and wrap up their criminal careers forever. not without a fight they won't! in hot pursuit are the boys in blue with police helicopters and swat choppers. not only that but the military isn't too happy about the stolen military plane and have sent out their pilots to help with the chase in air force jet airplanes. are our piggy friends in over their heads this time? can the bad piggies turned bandits avoid the oncoming air assault and stay in the air long enough to pull off the biggest, craziest job of their lives? it might sound simple but the longer you survive the more the game speeds up until the military and police craft become a blur, tenacious as ever. keep collecting money and keep collecting points until you fall and then share your score with friends on game center. smash piggies 2, an addicting new game for girls & boys, is available on iphone 3g, 3gs, 4, 4s, & 5! get this popular iphone game app today and use touch technology to go on the best money spree ever!