You’ve just been robbed and need to get your gold back in talking tom gold run! set out on a running adventure and explore this endless runner game as talking tom and friends to chase down the robber! discover new worlds, different running styles and grab boosts to keep the adventure going! rush and jump over cars on the street and trains in the subway as you chase after the thief. running will pay off – collect enough gold to build your own dream home from the ground up in talking tom gold run! talking tom gold run features: endless runner games - run after the robber to recover your gold and build your dream home - find your way through the maze of cars and trains to catch the thief - run your way after the raccoon robber! dodge as many obstacles and keep running after those items! - run and jump as talking tom, talking angela, talking ginger, talking hank and talking ben dash around new worlds - run through the subway tunnels to explore different worlds in a single run - unlock infinite running worlds to learn different endless runner mechanics racing games leaderboards - compare games and scores on the talking tom leaderboards and become the best runner - connect with friends via social networks and share running scores in-game purchases - collect or buy vault codes to earn super-secret loot and prizes in this action packed, runner game - depending on how your running progress, different items will be for virtual prices rush after the robber as you jump over a maze of cars and trains. discover new worlds when you travel through subway tunnels as you try to collect your gold in talking tom gold run! download now and become the best infinite runner! talking tom gold run includes the promotion of outfit7's products and advertising, the option to watch videos of outfit7's animated characters via youtube integration and links that direct customers to our websites and other outfit7 apps. this app contains: - the possibility to use and connect with friends via social networks - the option to make in-app purchases - alternative options to access all functionalities of the app without making any in-app purchases using real money (build progress, in-game functionalities) - promotion of outfit7's products and advertising - items are available for different prices in virtual currency, depending on the player's progress - watching videos of outfit7's animated characters via youtube integration - links that direct customers to our websites and other outfit7 apps this app is privo certified. the privo safe harbor seal indicates outfit7 has established coppa compliant privacy practices to protect your child's personal information. our apps do not allow younger children to share their information. terms of use: http://outfit7.com/eula/ privacy policy: http://outfit7.com/privacy-policy/

- You’ve just been robbed and need to get your gold back in ..

- You’ve been robbed! explore this endless runner as .. 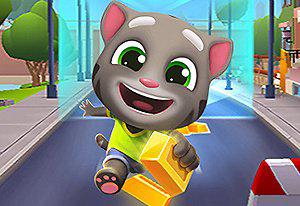 - Talking tom gold run is an endless runner game, your job is ..

- Come get engage with tom gold run and get your own share of ..